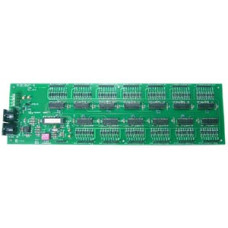 The MIDIOUT Driver Board turns its output pins on or off based on MIDI input data.

The MIDI Driver Board can be used by organ-builders as well as hobbyists requiring controllers via MIDI. Organ-builders typically use the Classic MIDI Driver Board as a pipe driver to allow connection of wind-blown pipes to an electronic organ. Thus, a rank of pipes may be added to an organ with MIDI outputs. In addition, pipes may be played using MIDI from a computer. MIDI information received on the MIDI IN connector is transmitted on the MIDI OUT connector thus, multiple boards may be chained together to add extra pipes, LEDs, and incandescent lamps.

The MIDIOUT boards are not limited to pipe-organ applications. For example, in model railroad systems, these boards can be used to drive motors, solenoids, LEDs, and incandescent lamps, etc. Almost any computer-controlled MIDI switching system can benefit from the use of a MIDI Driver board.