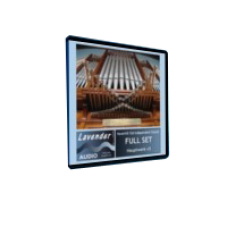 The philosophy behind this extended version has been to try to keep faith with the concepts of Binns’ original instrument whilst updating some of the sounds and trying to increase the range of repertoire the organ can tackle convincingly. There are several newly sampled ranks and others which make use of existing Haverhill samples - these have been repitched and reworked as necessary.

Computer requirements are higher than the Full set, as would be expected by the increased size of the instrument. However, the complete instrument may still be loaded in less than 3 GB RAM, if the option to load in 14 bit and truncate release samples is taken. For example, at 14 bit, using single loops, single releases, lossless compression and release sample truncation option 4, the complete set may be loaded in approximately 2600MB RAM. For further information on computer requirements, please consult the user manual by clicking on the link below.

The Great organ now benefits from having a separate 4 foot flute (the Suabe Flute from the Choir). The Mixture has been reworked to give an extra rank, which helps greatly to even out the breaks in the stop as well as adding a little more brilliance in the middle register. The Clarion is mainly taken from the Posaune and adds a reedy brightness.

The Swell organ is now provided with a proper secondary principal chorus. The Mixture has been totally reworked and is now “clean” - ie with unison and quint ranks only. In conjunction with the new Fifteenth it adds an authentic English brightness to the 8 and 4 foot principal ranks. The Sesquialtera is a reworking of the original Swell mixture, pitched at 17.19.22 in the bass and 12.15.17 in the treble.

The Choir organ has been extensively remodelled to provide more in the way of romantic sounds as well as a proper cornet separée. The Viol Celestes provides a keener string celeste in comparison to the Swell Voix Celestes and the Unda Maris uses the existing Dolce samples to give a flute celeste when drawn with either the Dolce or Concert Flute. The Flautina from the swell organ forms the basis of the Nazard and Tierce and with the Stopped Flute (Swell Stop Diapason) completes a useful family of small flutes on this division. A small Trumpet expands both chorus and solo options and the powerful Tuba allows the organ to tackle properly works of the many English romantic composers who call for this distinctive stop.

As with the swell, the Pedal organ gains a more complete principal chorus whilst the 32 foot additions are more romantic touches. The existing Harmonic Bass (Pedal Bourdon quinted with the Pedal Open) is so effective that a 10 2/3 Quint has been provided to allow this effect to still be available.

The Trumpet en Chamade can optionally be loaded as two separate ranks to allow the stop to be individually voiced on the Great and Choir (HW Concert version only). It is still possible to load the stop as a single rank available on both divisions to conserve memory if necessary.