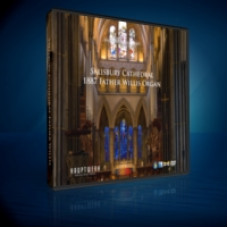 Salisbury Cathedral is one of Great Britain's most remarkable and historic monuments dating from the medieval era. Unlike most large cathedrals from this period which took generations to complete and featured architectural styles from several periods, Salisbury Cathedral was built in a startling 38 years dating from 1220-1258 and maintains the same medieval architecture throughout the building, a rare feature not generally found in buildings of this magnitude.Salisbury Cathedral also features the tallest spire in England (completed in 1330) reaching 404 feet and is just minutes away from the historic site of Stonehenge, perhaps Great Britain's most famous and baffling monument. There is much speculation to this day as to what Stonehenge was actually used for. Theories range from holding religious ceremonies, a sun/moon dial for keeping track of seasons or a theater for entertainment purposes.The cathedral also contains the world's oldest working clock built in or before 1386. It was originally located in a separate bell tower just north of the cathedral. The clock tolls every hour. Salisbury Cathedral also houses Britain's 'Bill of Rights', the Magna Carta. Nearly 500,000 people visit the cathedral each year in addition to the thousands that attend weekly services.

Salisbury Cathedral is also home to one of Britain's greatest and most well known pipe organs which was built in 1877 by Father Henry Willis (1821-1901). The instrument consists of 61 ranks and 65 stops over 4 manuals and pedal with two main cases on the north and south sides of the quire and an additional case for the 32' pedal pipes in the north transept.In an edition of The Musical Times from the year 1898 a supplement titled A Portrait of Henry Willis discussed the origins for Henry Willis' nickname 'Father' Willis. Similarities were drawn upon Henry Willis and Father Bernard Smith, a 17th century organ builder for the King. The article from the publication was written as follows:

"Two hundred years ago there lived in this country a great organ builder whose instruments were the glory of their maker. Two of his nephews were associated with him in his business. Partly to distinguish him from his younger relatives, but more especially as a mark of high appreciation of his great abilities and artistic worth, he was canonised (sic), so to speak, with the title "Father". His name is familiar enough in the history of organ building - Father Smith. Henry Willis is also assisted by a younger generation, having two sons - Vincent and Henry - working with him, in whom he has great confidence and hopes. It is natural, therefore, that he, the greatest organ builder of the Victorian Era, will be called Father Willis."

The Willis building firm also had several inventions and patents which helped pave the road into modern organ building as we know it today. Some of these include:

Father Willis' system of scaling did not rely on regular halving ratios and therefore it was possible to manufacture and voice flue ranks with a smooth 'power curve' throughout the compass. Many firms have attempted to copy these scales by careful measurement, but have failed. These are secrets which are very much guarded by the firm and only its closest advisers are allowed access to them. High-pressure reed voicing, in particular some 16" wind pressure Tuba ranks have been a specialty all their own throughout the history of the Willis company. The organ has been hailed by many as the finest Willis organ ever built. A statement from then Oxford Music Professor, Sir Frederick Ouseley written to the Salisbury organist (in 1877) John Richardson read: "I honestly believe that you have the finest church organ in the world - certainly the best in England, and I heartily congratulate you on the same." Later, Father Willis himself said to Sir Walter Alcock, organist at Salisbury from 1917-1947, that he believed the organ was his best work to date. Very few changes have been made since it was originally built and nearly all pipework is original and still cone tuned. Some minor changes to the instrument included the following:

The organ is well maintained and tuned on a monthly basis. It is actively used for daily services and is in constant demand for recordings by organists from around the world. The Father Willis organ at Salisbury Cathedral is no doubt one of the finest examples of organ building in England from any period in history. Special thanks to Salisbury Cathedral, David Halls and in particular Daniel Cook, Salisbury Cathedral's Assistant Director of Music and Organist for making this project possible. For CD recordings of the Willis organ we recommend Daniel Cook's recently released CD "The Organ Music of Sir Walter Alcock" released by Priory Records product # PRCD 1008 http://www.priory.org.uk