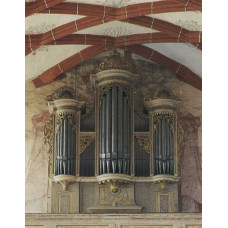 The Gottfried Silbermann organ of St. Marienkirche is what we like to call the "little gem"! Upon completion of its larger 'sister' in St. George, the contract was written up between Freiherr von Friesen and Silbermann on November 12, 1721 to build a new organ with a single manual for St. Marien. The original specification called for 9 stops (omitting the Subbass 16 and the Tertia 1 3/5) and Tremulant. Unfortunately no records exist regarding the addition of these two stops by Silbermann.

The St. Marien organ has not suffered from severe changes throughout the years. Documented works include: a number of repairs between 1732 and 1760, mainly concerning the bellows; 1833/43 a comprehensive overhaul proved necessary, carried out by the organ builder Urban Kreutzbach in Borna. He installed a pedal coupler, removed the tremulant and tuned the organ to equal temperament. Fortunately the parish waived the suggested installation of a Bordun 16' to replace the Tertia and Sufflet stops. The original bellows were replaced with an electric blower in 1935. In 1942 considerable damages of the church building became obvious which lead to the temporary removal of the organ. For the Bach fest in 1950 the organ was put up in the old townhall in Leipzig and thereafter lent as an exhibit for the Berlin Bach exhibition. It took 10 years (1960) to see the organ returned to St. Marien, its original location.

The organ of the St. Marienkirche attracted many distinguished musicians to come to Rötha. During his stay in nearby Leipzig, Felix Mendelssohn-Bartholdy frequently played on and was inspired by the instrument. Organists are delighted by the pleasing reaction of the organ tracker and friends of the organ as well as specialists admire its sound (especially the famous Principal 8) which is supported by the acoustic properties of the church.

The recordings use long 8 -10 second samples which includes up to 3 or 4 seconds of natural church reverb. Each pipe was recorded from all 11 stops and looped perfectly. Keyboard, pedal,stop and blower noises are also included which the user may turn off if so desired. The keyboard range is C,D-C3. The current tuning is Chorton A=465 which is reproduced through Hauptwerk. The organ set was not "digitally tuned" so the realism is even more convincing.

MIDI Works will be closed for Simcoe Day August 3, 2020. All orders and shipments will resume the next day. Thank you for understanding.